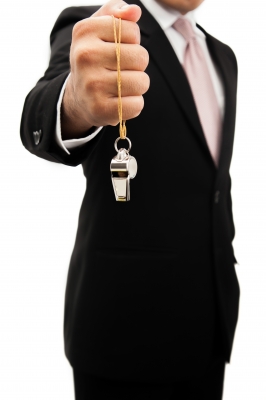 Have you discovered illegal activity at your place of employment? Is your career now being jeopardized because you did the right thing and reported the illegal activity?

Under the Whistleblower Protection Act, the federal government’s Occupational Safety & Health Administration (OSHA) protects individuals who have observed wrongdoing and who were then punished for doing so, also known as whistleblowers.

How to Know You Have a Whistleblower Claim in New Jersey

It can be difficult to know if you have a whistleblower claim in New Jersey. Consider the following when trying to decide if you should do something about your situation.

– You’ve observed discrimination at your workplace.
– You know that company executives are cheating shareholders with fraudulent numbers and accounting.
– Your employer is cheating the federal government.
– There are brides being paid to cover up wrongdoing.

There are many other reasons your employer may be in violation of the law. If you’ve observed illegal activity and reported it, and now you’re suffering from it, you could have a whistleblower claim.

About the OSHA’s Whistleblower Protection Act

OSHA’s Whistleblower Protection Act means that an employer cannot retaliate by taking “adverse action” against any worker who does the right thing and reports wrongdoings. Some examples of this adverse action may include:

What to Do if You Believe You Have a Whistleblower Case

OSHA prohibits employers from taking action to discriminate against their employees for exercising their rights under federal law. Some options you may have include:

– File an OSHA complaint.
– Participate in an inspection or talking to an inspector.
– Seek access to employer exposure and injury record.
– Raise a safety or health complaint with the employer.
– File a claim with the human resources department.

These rights include a broad spectrum of options that an individual may have to report if an employee observes wrongdoing. Once you have reported the violation, the employer cannot take adverse action against you. However, if your employer has taking adverse action against you after you blew the whistle on his or her wrongdoing, you can do something. You must act quickly though. Under federal law, if you have been retaliated or discriminated against for exercising your rights to report wrongdoing, you must generally file a complaint with OSHA within a specific time period of the alleged adverse action. This time period starts from the time an employee learns that he or she will be retaliated against not the last day of employment.

Effects of Filing a Whistleblower Claim

There are several remedies for a whistleblower who has received adverse action by his or her employer. Several employees just want the adverse action to come to a halt. That may include regaining employment or returning to the rightful positon after a demotion. Correcting the adverse action can include a wide variety of other possibilities as well. Additionally, for a century and half, the United States Congress has offered particular whistleblowers both legal protection and monetary rewards. Lastly, you may be entitled to damages from your employer.

An experienced and knowledgeable labor and employment lawyer can help you. The Law Office of John J. Zidziunas has successfully handled several whistleblower cases and we are ready to put our training and experience to aggressively fight for you. If you believe you may have a whistleblower claim, please contact a labor and employment lawyer in New Jersey at 973-509-8500.

Image courtesy of suphakit73 from FreeDigitalPhotos.net